In case you don’t know about it, Ludum Dare is a game development competition where devs must create a game from scratch within 48 hours (for the competition) or 72 hours (for the Jam). Read more about it here: Ludum Dare 27. LD48, as it is known, started on August 23 at around 8 PM CST. I didn’t even know what it was until 9 PM. This dare’s theme was “10 seconds”. Different interpretations of the them could be used, but most obvious would be time based games that count you down somehow. I saw some pretty great interpretations like “The Duelists” and “Time Flies Straight“.

I didn’t start the first night, since I found out so late and Molebears Outbreak was released that night for IOS, so I was distracted. I did mull about what I would do the next day. I knew I didn’t have enough time and art skills to do anything too complicated. I also wanted to break out of the normal game play mechanics and teach a life lesson. My choices came down to:

I really wanted to do #2, but I would need to create 3D graphics of a guy floating, so I didn’t do that. I went with “Last Words”.  See it here

You are about to go skydiving. You receive instructions from a coach on how to deploy your parachute (press the K button). After jumping, your chute does not open. You have the chance to send a text message to your loved ones before dying.

There is not much game play per say. This is more of a minimal story driven game with the ability to type in a message at the end.

When you click on the phone icon to type in a text message, you have 10 seconds to do so. Instead of being timed (you wouldn’t be able to write anything meaningful in 10 seconds), every button press you use takes up 0.1 seconds, allowing you 100 button presses. Backspace counts as a button press so players must think carefully. After dying, the player has the option to send a real life twitter message out.

At the end screen, there is a fake statistic of the total number of players played, total who died, and total who survived. This is used to give a hint to more thoughtful players that there is a way to survive. There is a second life message I wanted to convey: Don’t be distracted, ie, Don’t text and skydive.

When the coach is giving you instructions, there is a moment where he goes quiet and your friend sends you a text. A phone icon appears and dances around, begging you to press it. The player is given a tutorial about the 10 second rule here, BUT, if the player doesn’t click on the icon and waits for 10 seconds, the coach will give the player instructions for the back up chute, which is hold the L, D, 4, and 8 keys down for 10 seconds. The player gets the good ending and can tweet out their survival also. 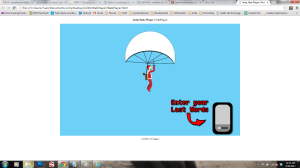 The game is simple, but I’ve received pretty good words so far. It’s probably too short to complain much about, but I’m happy I made it in time at all, since I only got to spend maybe 4 – 5 hours on it (real life gets in the way). There is another dare in December. I probably still won’t get much time to work on it, but I’m going to be more ambitious.

Love the idea. The interface is a bit clunky (having to switch to the mouse to send the message is annoying).

Nice twitter integration and “cinematics.” Very interesting. I wish I knew how to save myself!

REALLY liked this one! What a cool idea!

Really enjoyed this one. I’ll save myself yet!

Theory behind it is cool 🙂
Nice game 😀

Great work :), but I couldn’t figure out how to live D:

Great! Although I lived on my first go 😛

WAT? I loved the text message before dying idea… then I noticed that SOME PEOPLE LIVED?! What’s going on here then, hey?!

Its a cool idea, but I think there should be more too it than just typing a message before you die. The twitter thing was neat too. Good ideas.

What I write about

Innovative Games and Apps to the Core

Learning about .Net,Web and Mobile development in Australia.

Learn about game design, development, and marketing by hearing from others; or submit your own articles and get publicity for your projects! The opinions of the writers aren't always the same as those of the editors' or readers', and vice versa, so comments and questions are encouraged!

Chapter one of thousand.

Mostly about everything I love to do.

Create. Play. Write. Review. Only the things we like